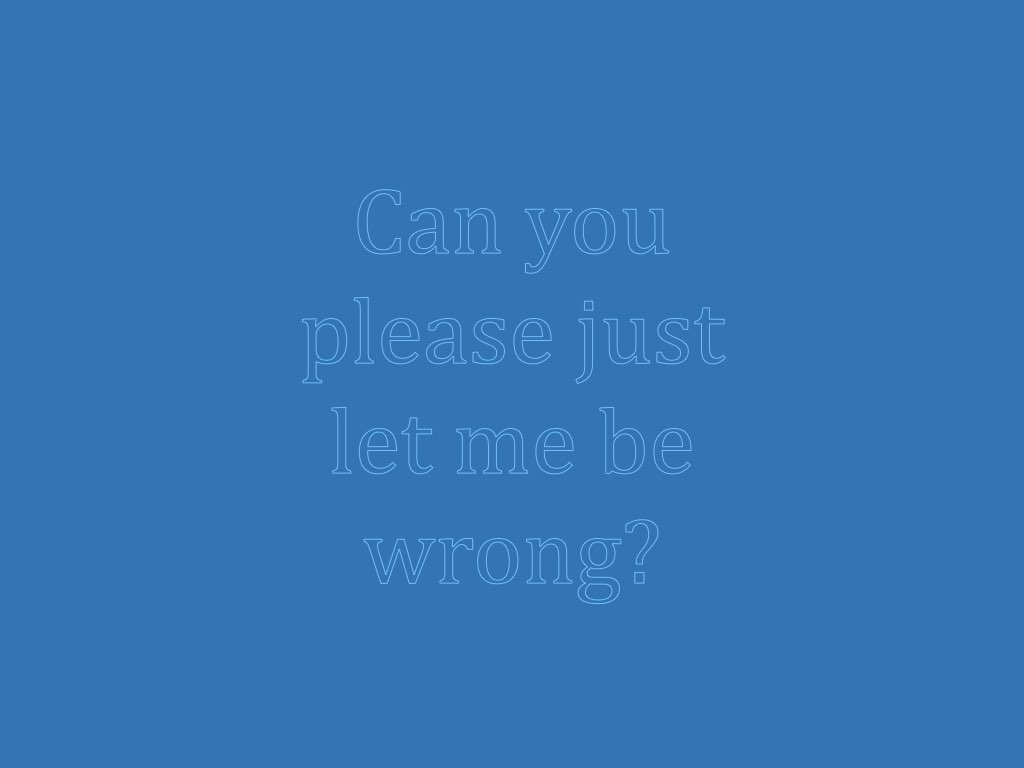 Hoo boy. Here goes. This is not a fun discussion. But it’s time.

It’s time, because somebody has to push back on the lectures about holding certain beliefs on current events. I grow so tired of being told that views which part from the mainstream narrative are “baffling,” “damaging to the church,” “unreasonable,” “spreading falsehoods,” etc. It’s time, because so many of us have spent far too long shutting our mouths and changing the subject when “those crazy/stupid/rotten people who disagree” (i.e., people like us) are brought up in conversation.

If you’re in that camp, have you considered that maybe from the other side of the fence, your view is baffling? That the unreasonable person is the one who, in practical terms, defines “reasonable” as “agreeing with me on current events?” That other people think you are the misinformed one, and that they’re willing to give you the grace of merely believing you to be misinformed rather than a liar?

It’s an unfair rhetorical tactic to say disagreeing with the mainstream narrative on an issue is “dangerous” and “harmful to Christian witness.” That’s not how loving brethren argue. It’s how condescending people argue. It’s not a good faith argument, because it’s emotional rather than logical. I’ll be straightforward with you – it’s wrong. Why? Because it’s divisive. It says you have to submit to me and my views, or you are being unreasonable and hurting the church. That’s exactly what Romans 14 told us not to do.

On a lot of issues, I’ve kept my views to myself because I didn’t want other Christians to take offense. But who’s in the wrong in that equation? Me, for holding an opinion? Or them, for responding that way? In other words, if we’re able to remain friends while I know your opinion but suddenly have a problem once you know mine, maybe the issue is not with me.

I’m allowed to hold an opinion and even express it, so long as I don’t beat people over the head with it. People who hold views opposite mine – particularly mainstream views – rarely show that kind of hesitance to offend. When only one side is allowed to talk, we don’t really have unity.

What matters far less than the views themselves is our method of handling them. If one insists that everybody has to hold the official view on every issue or else they are in bad standing as Christians, we have a big problem. Me and my particular views matter little, though, other than as a device to introduce ideas that have been pronounced as anathema. I could go into any number of hot button issues – Trump and politics, racism and critical race theory, conspiracy theories, whatever else – but I’ll limit this discussion specifically to COVID matters. So, here goes.

The phenomenon of people holding alternate views such as these is not going away. It’s the effect of the internet age, where “truth” is decentralized. You can see that as a good thing or a bad thing. Those I’m addressing see it as a grave threat, because experts and authorities are being broadly ignored and a lot of bad ideas are getting out. I see it as a great thing, because in the past we had no ability to know if what we were being told was right or wrong. At least now we have a fighting chance. If the cost of that chance is the spread of some falsehoods, it’s a price worth paying. To say otherwise is to say that widespread belief of falsehoods – even costly ones – wasn’t an issue before the last 10 years. (Hello, Iraq war.)

Because this phenomenon is so widespread, it only makes sense that huge swaths of Christians believe alternate views. If you really believe it’s a sin issue, get ready to discipline and disfellowship scores of members. If you don’t, can you please just let us be wrong? Can you please advocate your view and let some of us disagree?

I’ll let you believe what you want to believe. Can you please do the same for me? Can we agree that our Christian unity can overcome differing views on a news report? Are we really so casual about our unity that we’ll throw brethren under the bus in order to side with government or media? You might vehemently disagree with every position I took here, and that’s ok. But can you please just let me be wrong?