I recently got access to an early copy of “Fault Lines: The Social Justice Movement and Evangelicalism’s Looming Catastrophe” by Voddie T. Baucham, Jr. Since I’ve long found Dr. Baucham to be a compelling speaker and writer, and this issue is one that demands our attention, I put a pause on my reading list to see what he had to say.

The short review: this is a desperately needed book, written by perhaps the best man for the job.

It’s no secret that race discussions of recent years have created a major “Fault Line” in both society at large and churches specifically. Writing as a black man who has the cultural experiences of South Central Los Angeles, white neighborhoods in Houston, and now Zambia, Africa, has an education in both sociology and theology, and has clout in the world of Christendom, Dr. Voddie Baucham may be better suited than anyone to offer the dissenting opinion on Critical Race Theory (CRT) in evangelicalism. The first few chapters explore Baucham’s personal background and his experiences navigating racism and racial division, affirming that he certainly has the experiential knowledge some consider a requirement for offering an opinion on race matters (something the author rejects and labels “ethnic gnosticism”).

Much of what Dr. Baucham says builds on the foundations others have set with regard to CRT, Intersectionality, and Social Justice, but his compilation of the arguments along with quotes directly from the sources (Kendi, DiAngelo, et. al.) makes for a good introduction to the current “antiracist” movement. It won’t break any ground for the reader who has spent time researching CRT, but for those who are new to the topic it’s a good primer, and for those who are somewhat familiar it will shore up their understanding of the ideas being promoted.

The truly controversial section, I suspect, is where “Fault Lines” begins to get into specific applications of the questions at hand. Police shootings and the narratives surrounding them are examined with penetrating questions that challenge the CRT framework. The book also explores some of the more popular responses to claims of racism, such as abortion in minority communities and black on black crime. Baucham does not merely parrot them as the “gotcha” talking points they are often used as, but digs in to the question of their validity in the discussion.

For me, the greatest value is in the way the book examines the issue within the church world. I believe the case Dr. Baucham makes is a strong one, that CRT will continue to drive division because it is incompatible with core ideas like the Gospel and the sufficiency of Scripture. CRT is not just an analytical tool for helping us understand racism. It is both a worldview and a competing religion, as Baucham demonstrates, and the evangelical leaders who have jumped on board seem unaware of the Trojan horse they are wheeling in to their churches and to Christendom as a whole.

I pray this book reaches open hearts and minds and helps heal divisions before they grow any wider. But, I’m pessimistic. I think it’s far more likely to be read and championed by those who agree and ignored or spurned by those who don’t.

In any case, it offers a well-researched, well-argued alternate view to the prevailing narrative of the day. Even if you don’t end up agreeing with the conclusions, it provides valuable insights into the side of the argument that is often either under-represented, prevented from speaking, or argued poorly.

4 stars out of 5, highly recommended

To preorder Fault Lines on Amazon, or for more info, go here. The book release date is scheduled for April 6.

Note: I was given early access to my purchase – not a free copy – by the Fault Lines Launch Team in exchange for posting a review. 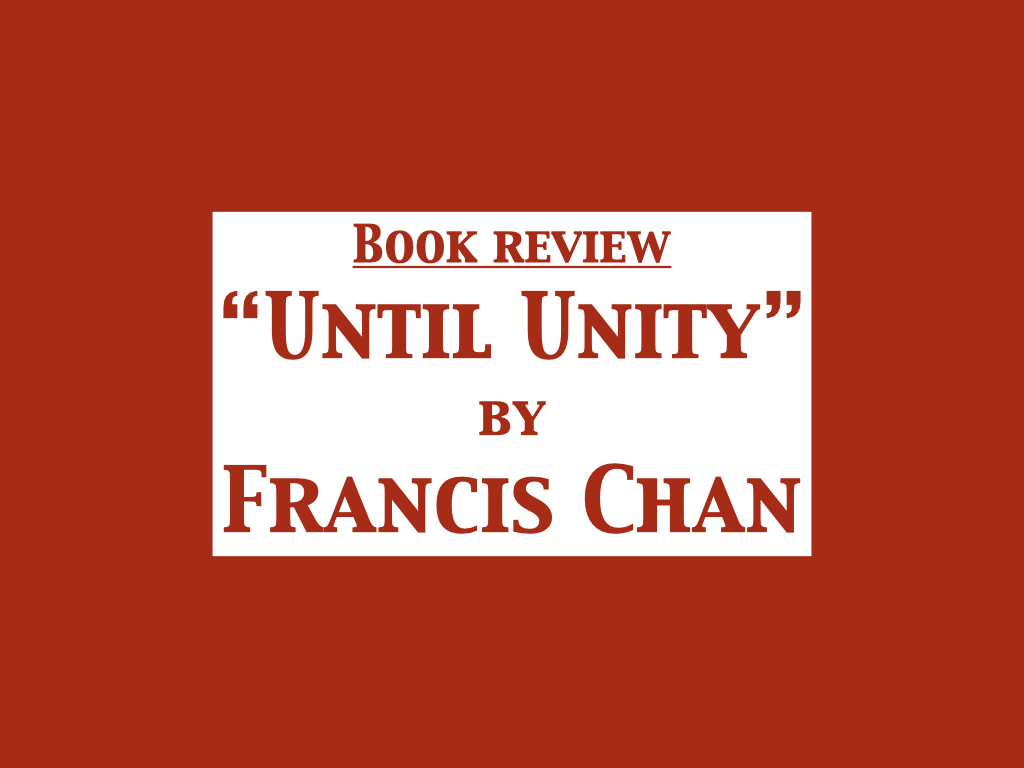 I’ve long been a fan of Francis Chan’s work and have been heavily influenced by his views on the church, so when I saw he had a new book coming out on Christian unity, I placed my preorder. With proof of purchase the publisher offered a free audiobook that could be accessed immediately, so I jumped at the chance to get to listening. And though I enjoyed the audiobook, I’ll be sure to revisit some of the key points when my print copy arrives, as I much prefer that medium for comprehension and understanding.

As always, Chan does a great job of getting us thinking about the holiness of God and the importance of serving Him with reverence and loving one another. There is great value in the early chapters which call the reader to take God very seriously and realize He is just as passionate as our love and unity as He is about our sexual purity, evangelistic zeal, etc. Yet we view preaching on such issues as sound and faithful yet worry about any push toward unity as liberalism and compromise. Fair points, to be sure.

The call to humility is especially important. The matter of unity is one we simply have no hope of getting right if we don’t approach it with humility. There’s an arrogance to being too exclusive, looking at ourselves as the true arbiters of what is right and cutting off others, and there’s an arrogance to being too inclusive, thinking ourselves to be more loving than even God may be. So, the emphasis on approaching the issue of unity with the right heart was well said.

But with any book on unity, the challenge is going to be in deciding when and where to draw lines. While he admits some lines do need to be drawn, and we can’t do the “Let’s just all get along” act, I still came away without a clear picture of when we should and should not be unified, in Chan’s view. There was basically only one chapter that got down to the brass tax of how to draw the circle of unity. And the practical takeaway almost comes out to “Let’s just all get along” anyway.

In that chapter, Chan drew on the controversies of Romans 14 and the matter of allowing others to be wrong sometimes. It’s an important section, to be sure, but not all matters are as minor as the eating of meats. In Paul’s discussion he’s discussing actions approved or allowed by God, such as eating of meats or observing certain holidays, which some may want to abstain from. We are free to limit our own freedom on such matters. But these are not matters of actively doing something against God’s revealed Word. Therein lies the big difference, and the real crux of the matter. Women in leadership, for example, is not a matter of “God has allowed it, but if you don’t want to participate then you don’t have to.” How then, do we view egalitarians? Heretical? Erring Christians? Acceptable, and just differing on opinion? There are times when we do need to take a stand. And he seems to agree with that point, even offering verses on those from whom we should withdraw… but I still feel left without clarity as to when that might be.

Chan’s ultimate conclusion, drawn from the writings of Watchman Nee (of whom I’m also a big fan) is this: anyone who has the Holy Spirit should be considered family. I think everyone agrees with that. And that might open the door a little broader than we like to open it. But who makes that decision? Will there not be people who claim to have the Holy Spirit but don’t? If you don’t have a clear classification of firsts matters, secondary matters, and beyond, then it’s arbitrary. And arbitrary line drawing is why we don’t have unity in the first place. So we’re back where we started.

As a side note, the author’s personal anecdote about healings he and others performed while on mission in Myanmar will raise an eyebrow (at the very least) for many readers.

Ultimately, I give it a 2 out of 5 stars. I don’t feel the book does much to move unity forward. Unifying Christendom is going to take a lot of hard work in sorting out what can be tolerated and what can’t, and who has to change their ways or give up certain beliefs or preferences. It’s a great thing to desire and pray for, that we would all come back under the same umbrella of faith, love, and obedience to Christ, but it’s going to take a lot of difficult discussion. And I don’t feel this book engaged in that discussion nearly enough to help the reader take steps toward unity.

To purchase “Until Unity” on Amazon, go here.
We reviewed Chan’s previous book, “Letters to the Church,” on the Too Many Books podcast. You can listen to that review here.