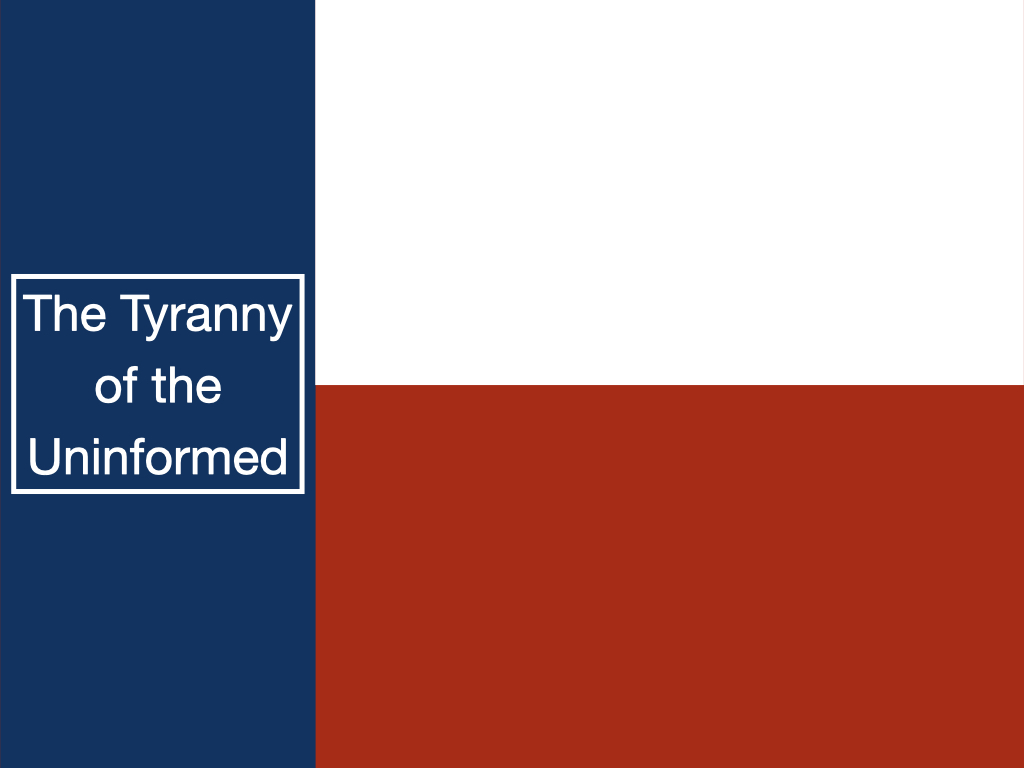 “Did you hear Governor Abbott just said they’re lifting the state’s mask mandate?” I asked the lady behind the counter at my neighborhood coffee stop last week, just minutes after the news broke.

“No, I didn’t. That’s interesting,” she replied.

“Leave it to Texas to be the first!” piped up the guy in line behind me.

“Well, actually Florida and some others have…” I started to say, before being interrupted by the lady at the back of the line –

“Yeah, and everybody in Florida is sick!”

As brief as this exchange was, it speaks volumes about our national COVID conversation.

The fact of the matter is, they were both wrong. Texas was not first, and Florida (and the states that opened long before it) is not overrun with sickness any more than moderate states like Texas or hard lockdown states such as California. In truth, they’re really not much different than anywhere else. And yet my fellow customers both confidently asserted these falsehoods with the implication that Texas is going on a suicide mission by throwing caution to the wind and lifting the mask mandate.

It’s been like this from the beginning. The mainstream opinion loudly shouts down any dissent, and here we are a year later having learned almost nothing. We ignore the fact that the effects of the virus are heavily scaled to age. We ignore any statistics that say areas with mask mandates have shown little difference in results from areas without them. We can’t have a conversation because the “moral” response was decided long before the facts had a chance to be debated.

Take, for instance, the early refrain that anyone who even mildly opposed state measures “Wanted to kill grandma.” The argument is presented as if they’re saying, “Such a position could be dangerous and potentially fatal to the elderly.” That’s not the same thing, though. “You’re going to kill grandma” does not leave room for discussion. It presents the discussion as settled, but by emotion rather than fact. Since emotion can’t be argued with, and since the conclusion has been assumed, the debate over the facts can’t happen. Rather than discussing ways to keep grandma safe, your business has to go under, your mental health has to plummet, and your children’s development has to be stunted. Period. Any objection makes you a grandma-killer.

Because emotion rules, facts won’t see the light. One can comfortably feel superior to scores of one’s fellow citizens just by accepting what is presented as fact, because to hold the majority, mainstream opinion, there is almost no research required whatsoever. We are all baptized in that viewpoint daily. It’s almost a feat to not know that side’s arguments. If you are going to believe something else, you have to go looking for it.

This does not mean that everyone who holds the majority opinion is uninformed. It also does not mean that the minority opinion is always correct, or that its adherents are all smarter, better people. Plenty of people far smarter than me disagree with me. It means nothing more than this: the minority opinion, by nature, will always be made up of a more informed collection of individuals. We who hold minority opinions already know what you in the majority think, because we’re shown that point of view (and pressured to believe it) every single day. We don’t even have to go looking for it. For you to know our opinions, however, you will have to have the willingness to look in places you have been told are morally unsavory. Because most don’t do that, most won’t be informed on both sides.

Why then, does the majority opinion hold such a superiority complex over the minority opinion? How did the two people in the coffee shop – who clearly had not done the research necessary to make their claims – have such boldness to proclaim their incorrect understandings as settled, unarguable fact? They were wrong and yet the discussion framed me as the backwards one for merely pointing it out. How does that happen? Because the majority does not fight fair. To the majority, might makes right. Again, emotion rules the day.

This L.A. Times story gives us yet another example of this bold confidence without any self-awareness or research.

High schools (and their foreign equivalents) have opened all around the world, many of them months ago. We don’t have to sit around and wonder if it’s safe. We have more data than we could ever need. And yet here they are presenting this as some kind of mystery. They’re so far behind the documented facts on this, it’s little different than saying “Guys, we just saw somebody drink milk that came from a cow. Maybe it’s safe for human consumption!” Further, the model they’re citing includes testing students for covid every single morning. “If you want to open your campus, you have to do this,” says the presumed exemplary principal. Except high schools have opened literally around the planet, safely, without such measures. You don’t have to do this.

What we’re dealing with in Texas is another case of the exact same problem. We don’t have to wonder what removing the mask mandate will do. We’ve already seen populous, elderly, unhealthy states take such measures. By the same token, we’ve had rather lax lockdown measures for many months with regard to things like restaurant capacity and gathering limits, and other states are looking at us as crazy or suicidal.

Can we please stop pretending we’re walking blindfolded on the edge of a canyon when there are people who have already crossed the bridge?

This has been the hallmark of this whole matter – readily available knowledge gets either treated with skepticism, ignored outright, or morally condemned. If it doesn’t line up with the morally right view, it isn’t permitted a spot at the table. As long as that remains the case, we remain hopeless. Until facts can win the day – honestly, until facts are even allowed to be discussed – we will continue to be vulnerable to very bad people and very bad ideas.

If you want to go down the rabbit hole of the alternative view, start with Tom Woods’ free eBook that breaks down misleading Covid charts. Check out The Great Barrington Declaration, an anti-lockdown paper written by 3 Ph.D.s in the field and signed by over 50,000 scientists and medical professionals. And, scroll through Covid Clarity and other related Twitter accounts who have been digging up data since the beginning.

Can You Please Just Let Me Be Wrong?

Fear of Death is not a Christian Virtue

Fear is the Name of the Game. Stop Playing.

The Day the Lockdown Should’ve Ended

One Year into Covid, I was Horribly Wrong